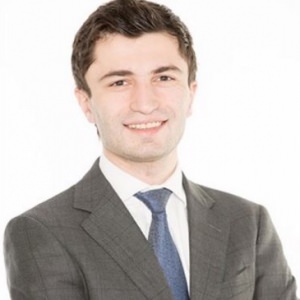 Rza is a private banker, Wealth Manager, at the ANDBANK, Escaldes-Engordany, Principality of Andorra, in direct contact with HNWI from Central Asia, Caucasus, Russia, Ukraine, Turkey, Greece and Lebanon. Rza is also the Deputy Secretary General of the influential Nizami Ganjavi International Center promoting Learning, Tolerance, Dialogue & Understanding whose influence has long since surpassed the Azerbaijan borders. The NGIC has successfully organized the Baku International Fora for the past three years turning it into a must-attend annual event on the world policy discussion agenda, drawing scores of current and former heads of state or government and hundreds of academicians.

Azerbaijan Diplomatic Academy, Baku, Azerbaijan (a double Major: Conflict Resolution and Security Studies; Caspian Basin Studies) Rza is doing his PhD in Economy since 2013 at the Academy of Public Administration. He won the prestigious Good Will Ambassador Award from the US Congress and Children Uniting Nations in recognition of international support to the welfare of children and the fight against trafficking. He is the Special Envoy of “Children Uniting Nations”, World Academy of Arts and Sciences – Junior Fellow and a very active participant in Club of Rome and Club de Madrid meetings.

He was previously a financial adviser, private banker at Credit Andorra SA, Andorra La Vella, Principality of Andorra, Founder and Director of ST Ventures LLC, Baku, Development Officer at the Azerbaijan Diplomatic Academy, Baku, Adviser, Youth Delegate from the Republic of Azerbaijan to the United Nations, New York, during which time he had delivered a speech at the UN General Assembly Economic and Social Committee (ECOSOC) and produced the Draft UN Resolution on Policies and Programs Involving Youth. He was also a Development Officer at the American University, School of International Affairs, Washington DC, Executive Assistant to the Dean of the Azerbaijan Diplomatic Academy, Baku, Intern at the Embassy of the Republic of Azerbaijan in the USA, Washington DC, Research Assistant at the Atlantic Council, Washington DC, focusing on the energy issues, Azerbaijan, Turkmenistan and China.