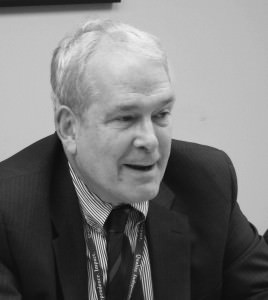 Charles K. Ebinger is a senior fellow in the Energy Security and Climate Initiative at Brookings. He served as the Initiative’s director from 2008 to October of 2014. Previously, Ebinger served as a senior advisor at the International Resources Group where he advised over 50 governments on various aspects of their energy policies, specializing in institutional and economic restructuring of their utility sectors. Ebinger has special expertise in South Asia, the Middle East and Africa, but has also worked in the Far East, Southeast Asia, Eastern Europe, Central Asia, and Latin America. He was also previously an adjunct professor at Georgetown University’s School of Foreign Service and the Johns Hopkins University’s Nitze School of Advanced International Studies.

Ebinger has 30 years of experience advising the highest levels of governments on a variety of projects funded by the U.S. Agency for International Development, World Bank, Asian Development Bank, Inter-American Development Bank, and European Bank for Reconstruction and Development. These projects addressed the restructuring of electricity, natural gas, and petroleum state-owned companies; the creation of regulatory regimes; energy pricing reforms; institutional strengthening of energy ministries and state-owned utilities; and enactment of energy efficiency programs. Ebinger has also been involved in most of the domestic energy and environmental policy debates since 1975, testifying before Congress and other federal and state administrative agencies. In 1975, as a foreign affairs officer in the Federal Energy Administration, Ebinger helped establish the International Energy Agency and its oil-sharing mechanism.

From 1976 to 1979, Ebinger served as vice president of Conant and Associates, an international oil, gas, and electricity political risk consulting company advising European, Japanese, and Middle Eastern oil, natural gas, and electric utility companies. In 1979, he became the founding director of the Center for Strategic and International Studies’ Energy and Strategic Resources Program and served as director until 1987. During this time, Ebinger was involved in all of the policy debates surrounding the restructuring of the U.S. electricity and natural gas industries, the Soviet gas pipeline dispute, the development of alcohol and other biomass fuels, the development of compressed natural gas as an alternative transportation fuel, and lifting the ban on the export of Alaskan oil. From 1987 to 1988, he was a senior consultant at Putnam Hayes & Bartlett specializing in the restructuring of U.S. and U.K. electricity and natural gas markets. From 1988 to 1999, he served as executive vice president at the International Resources Group (IRG), advising governments around the world on restructuring their state-owned energy sectors and setting up regulatory regimes.

In 1999, Ebinger joined Stone Webster Management Consultants as the director of the International Energy Practice, where he was deeply involved on utility projects in Venezuela, Indonesia, the Gambia, and Nigeria. From 2000 to 2004, he held several positions at Nexant (a Bechtel-owned company), including vice president and director of international utility services; senior vice president for Middle East, Central Asia, and Africa; and senior vice president for global privatization, restructuring, and regulation. During this time, his major engagements were in Saudi Arabia, Azerbaijan, Armenia, Jordan, Nigeria, Egypt, Pakistan, Nepal, and India. Before joining Brookings in June 2008, Ebinger returned to IRG to lead projects helping to strengthen and restructure the Afghan, Nepali, and Liberian energy sectors from 2004 to 2008. Charles has served on two presidential commissions on energy policy, and is the author of six books and scores of articles on a host of international energy and foreign policy issues. His most recent book, Energy Security in South Asia towards Cooperation or Conflict (Brookings Institution Press, 2011) draws on his 35 years of experience in the region, including having advised every energy parasitical institution in Pakistan since 1979. He also produced an edited volume of Business and Non Proliferation: Industry’s Role in Safeguarding a Nuclear Renaissance (Brookings Institution Press, 2011) with Brookings Nonresident Senior Fellow John Banks.

Ebinger has served on the boards of oil and gas companies and several non-profits, including serving as chairman at both the Chemical and Biological Arms Control Institute and Americans for Energy Independence. He is a former president of the national capitol chapter of the U.S. Association of Energy Economists. In 2011, he was appointed as an advisor to the National Academy of Sciences Panel on Energy Innovation. He has also been noted by the Nuclear Energy Institute as a leading voice on nuclear energy policy issues. Ebinger has sat on the boards of directors of energy companies, including North Coast Energy, an independent oil and natural gas producer, and Kokomo Gas and Fuel Company, a natural gas distribution company, as well as a number of non-profit organizations. He currently serves on the boards of the Jackson Hole Center for Global Affairs and the Energy Research Institute of India.